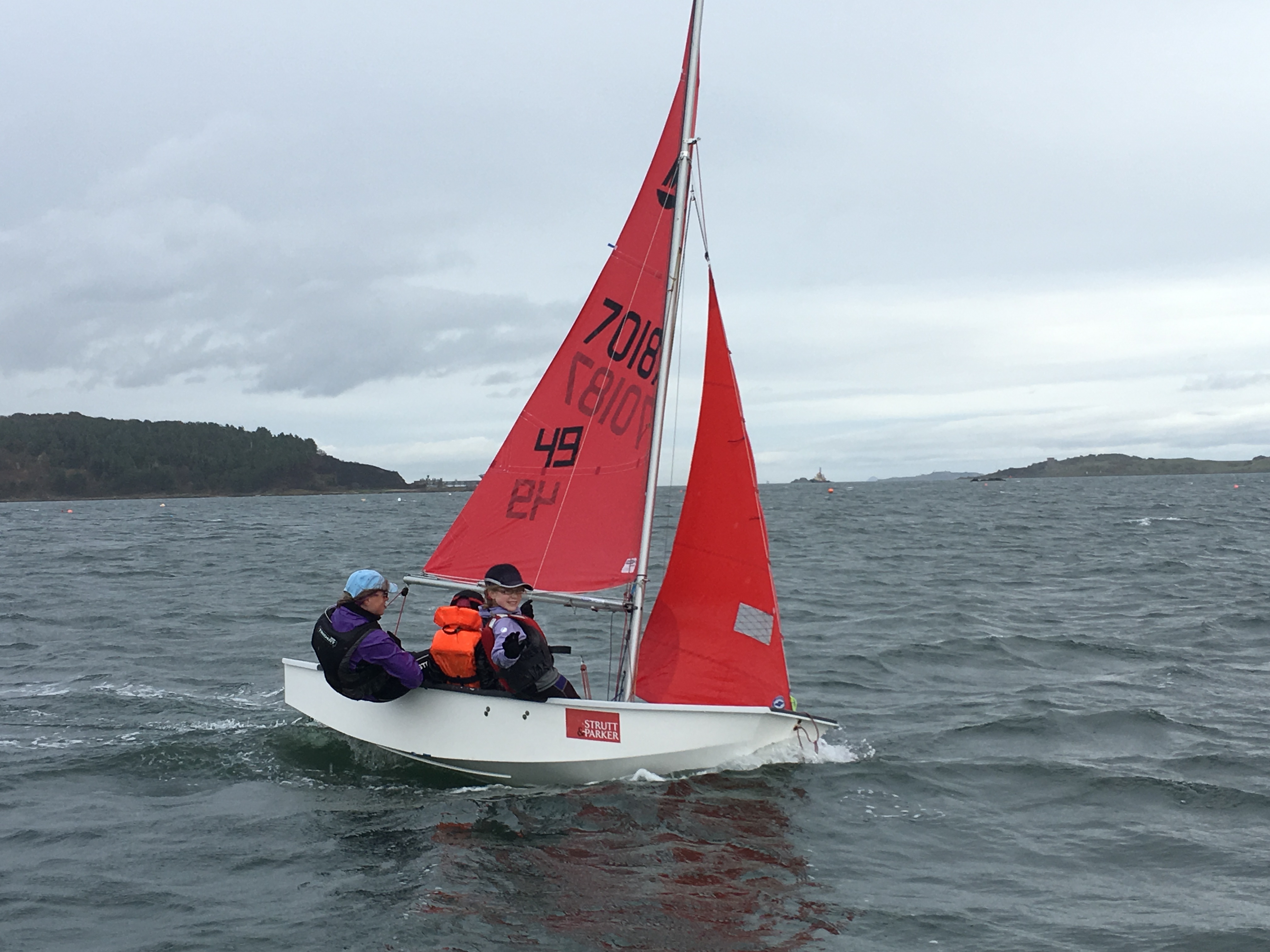 In fact, the club had been formed by way of an informal gathering organised by some local enthusiasts including Beattie Burnside, Alastair Burnside, Stewart Cameron, Stuart Black, and Brian Otway in 1971. At the time a family membership was a princely £2 a year.

The early facilities were very rough and ready access to the water was not ideal as the beach was strewn with football-sized rocks. Fortunately, one member, Commander Ginger Moore, was an explosives expert for the Navy and was able to get help with shifting some of the more difficult bits of rock. The club's records do not explain the nature of the help! The first clubhouse was an old wooden garage-sized hut. It was a useful place to heat soup, but that was about it the changing room was behind a tree!

At the formal opening, there were ten Mirror dinghies along with Albacores, GP14s, Enterprises and Bosuns. We don't see many GP14s and Enterprises these days, but Mirror dinghies sometimes feature in club racing. The first rescue boat was a member's sailing dinghy with an outboard engine fitted, but over the next year, Bill Kirkpatrick built, with the aid of Sports Council finance, a 16-foot wooden dory powered by a Seagull Century engine.

In early 1975, work started on the current clubhouse, which is a substantial log cabin design. The structure was erected by members and was almost completed over two weekends with work carrying on into the evenings until the frost forming on the rafters made it unsafe to continue. Another month of work the clubhouse was operational for the Mirror Open Meeting on 10 May. On 14 June the clubhouse was officially opened by the then Provost of Dunfermline, Les Wood.

The Club has continued to prosper over the years. Keelboat sailors joined up and moorings were put in place. The ups and downs have remained broadly the same. From the start, the Club was a hotbed of sailing talent, with many well-kent sailing faces part of the membership. It was and is more than a local sailing club, attracting members from far and wide. The quality of the sailors is evidenced by success at all levels of championships across the years.

Construction works have also continued as the Club continued to grow. In around 1995 "The Great Wall of Ken" was built by Ken Marshall, although sadly the new slipway means that that did not survive as long as it was thought it would. All is not lost though, as we intend to put a plaque on the new slipway to commemorate Ken's work.

One of the things that has been consistent over the years is the commitment to developing sailors. It is often easy to fall into the trap of thinking that this means only the young sailors there are many adults who want to learn how to sail and do so in a fun and relaxed environment. That is why the training offering for adults and young people is so important to the Club, and why it is an RYA recognised teaching centre. Looking back, fun and the social side of the club has underpinned everything that it does. Where else does Santa arrive delivering presents in a boat! They are called "work parties" for a reason!

The challenges are still the same. In a sternly worded section of a 1988 newsletter, the Commodore scolded members: "[T]he only disappointment was the number of members who promised to man rescue boats but did not turn up on the day." The Club is run by the members, for the members, and it is always a challenge to find the volunteers needed to keep the activities going. Fortunately, the Club has always benefited from and continues to enjoy the help of a dedicated group of volunteers. The "Tuesday Group" deserves special mention a group of volunteers who meet every wait for it Tuesday, and maintain the club grounds, the clubhouse, equipment and much much more.

These days the Club is slowly getting back on its feet after almost total closure during the COVID pandemic. If nothing else the restrictions imposed reminded us all how much we enjoy going sailing and how good it is for our health and wellbeing. Another constraint on the Club is very significant remediation works that are going on to deal with historic (low level) radiation pollution in the beach area around the Club. On the positive side, a brand new much improved and enlarged slipway is being constructed which will leave the club with top-class facilities.

Many, many people have played their part in making the club what it is today. This short note mentions only a few, and I have no doubt missed out on some spectacular stories.

As a Club we want to get back to introducing people to sailing, letting them enjoy sailing and hosting high-quality racing. We aim to get back to hosting local and national regattas, showcasing the location and facilities that we are lucky enough to enjoy. That's fifty years gone. I wonder where the next fifty will take us?